Wednesday night the Angela Peralta Theater was the starting point of “Voyage”, the graduation gala of Mazatlecan tenor Eduardo Tapia, who recently graduated with a singing degree from the Municipal Arts Center of the Cultural Institute of Mazatlan.

Under the direction of the maestros Enrique Patrón De Rueda and Martha Félix, the city’s grandest artistic stage shined with a show in which young Tapia was accompanied by the Camerata Mazatlán (directed by the maestro Héctor Javier Reyes Bonilla) and by 11 Soloists from the Opera Workshop of Mazatlan.

Romance, tragedy and comedy was paraded in front of the audience with great dynamism, thanks to a staging that was supported by classical and modern elements, but always focused on the vocal and interpretive excellence of the singers.

Thus, among arias of composers such as Wolfgang Amadeus Mozart, Vincenzo Bellini, Gioachino Rossini, Jules Massenet and Gaetano Donizetti, “Voyage” became an exceptional farewell for a young Mazatlecan artist who, from now on, is searching for new horizons accompanied by the love and respect for his colleagues and Mazatlan´s public. 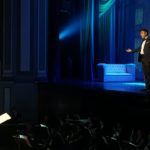